Linking up for What We're Reading Wednesday with Jessica!

Amazon sends me a lot of emails.  I'm guessing everyone who has ever shopped there gets a lot of emails.  They're constantly in search of becoming my BFF by recommending everything under the sun to me.  They get a step closer when they send me emails that say my Prime membership qualifies me to a free book a month from their selection of four.  I scrolled through the list and found a cover that looked interesting *yes, I know*. 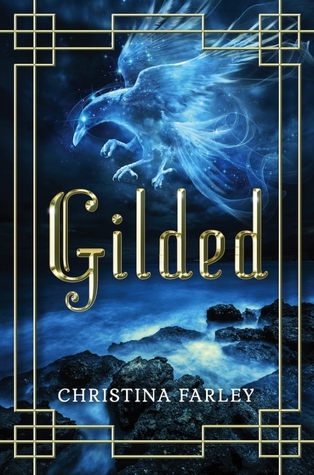 Gilded is the story of a young (16) Korean American transplanted back to Korea by her father's job transfer.

Her father (and deceased mother) were natives of Korea who moved to California (Micaela.....do you have a secret pen name?) Jae was born and raised in California, until the job transfer took her to Seoul.

Six weeks in to her new life in Korea, Jae Hwa starts to have unusual experiences....of a supernatural kind.  A mysterious man appears in an impossible moment, mythical creatures are sent to her defense, in all, life becomes a little complicated for the sixteen year old.

I hate to give too much away, because I don't like spoilers, so I'm purposefully going to be vague.  The plot centers around Jae Hwa being descendant of a princess highlighted in Korean folklore.  The princess escaped the demigod trying to kidnap/marry her, but not before she conceived a son.  That son, the princess bore in hiding, but the demigod returns to steal and imprison the first born female of each generation in the lineage of her family.

You guessed it, Jae has some unfortunate family ties.

Some parts of the book seemed overly predictable (I sensed the ending pretty accurately for several chapters), but in all, I liked it.  Maybe I'm overly lax in my judgment since it was free, but I really liked the look at Korean mythology.  The book also had the appropriate cloak and dagger of a secret society, a young hero having to make a self-sacrificing decision and even a little love story.

Jae Hwa has a crush on her high school classmate, Marc.  There is some kissing and they do profess love for each other in a near death moment near the end of the book, but it's very PG, so while the really young readers may not be ready for the story, teens are probably mature enough.

The book sets itself up well for sequel (which I'm fully expecting given that this book is billed as Book 1 in the Gilded series!) and I'm looking forward to Jae Hwa's adventures in tackling high school and the Spirit World.  I'm hoping the other books in the series will tread lightly on the romance because the storyline is so clever, I'd hate to have it go south.

Overall, I thought it was a strong debut novel for Christina Farley.  I'm trying not to hold the Editor's note of the Common Core curriculum guide to accompany the book against the author.....I can leave my feelings about creating robots out of this :)

For a taste, check out this opening line.  I thought it was a very strong moment for the author:

Stillness fills the empty stage as I press the horn bow to my body and notch the arrow.  I pull back the string.  The power courses through me, a sizzling fire in my veins.  I squint just enough so the mark crystallizes while everything around it blurs.

Email ThisBlogThis!Share to TwitterShare to FacebookShare to Pinterest
Labels: wwrw