As a young teen, I remember my mom retelling her reading of a book on a saint being attacked by demons.  She was reading it late at night and my father was out of town.  A pretty great time to spook yourself out.  But, then the voice of Mary spoke to her heart, "What would you do if there were someone attacking your child?"  Of course, she would fight them.  She would go after them with the veracity of a wild animal....and in that moment, Mary said, "Aren't you my child?" 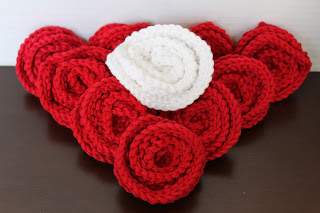 Mama's got our back.

Still, I've always been abjectly terrified by the idea of demons attacking me.  On the nights when the fear crept in, I would pray that I never face such trials.  I would pray, "God, I'm not strong enough for that."

Every now and then throughout my life, I've felt attacks pulling and pushing on my emotions, on my life.  No physical assaults, but there all the same.

At the beginning of October, I opened an Etsy shop that includes little knit roses for counting out the prayers of the rosary - especially helpful in the hard-to-pray categories of little fidgeters and older hands unable to hold small beads. 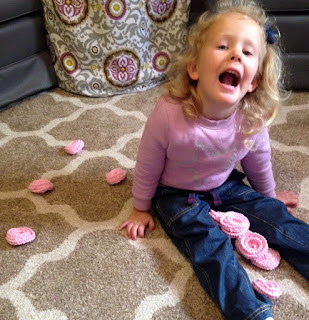 Before opening, I thought about how these would help more families bring a decade (or five!) into the realm of possible with family life.  I thought about little hands squishing the roses and proudly placing them in a basket or the family prayer space as each prayer was said.

I didn't think about how irritating lots of little hands holding roses and praying would be to the enemy.

I didn't think about how all those prayers - all those potential prayers coming from my knitting needles would be a declaration of war.

But, over the last month, my three year old has been plagued with nightmares.

My ten year old becomes anxious when she's not around others in our house.  The dog growls in strange moments.

There's been a lot of holy water and praying in these parts lately and things seem to have calmed down. (prayers appreciated though!)

After the first week, orders were really slow, and I started to doubt that my shop was such a good idea.

But it really came back to wanting these roses out there.  However many I sell, whatever profits or losses, I want little fingers to hold something soft and have sweet memories and attachments to the rosary.

This week, I've been working on a little bonus to toss in with the roses......and it's been a symphony of errors. 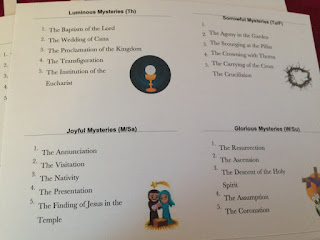 First, my printer decided to print everything in a lovely zebra pattern.

Then, I took the materials to my parents' house to print.  My computer wouldn't link up with the printer....the one that's it's been linked to for years.

After I was able to open the file on my dad's PC, I printed it out......then I noticed that everything had somehow shifted and the font was askew.  Awesome-sauce.

So, I'll keep plugging away.  One of these times, I'm going to get these cards to print right.  Until then, accept my slightly askew bonus with purchase of the roses - just as soon as I get them laminated.  What could possibly go wrong?  :-)

Now that I'm engaged in battle, it's time to sharpen my sword.  The battle has always been raging, but, now I'm paying attention.

If you'd like to sharpen your sword, take 20% off your order with the code MYSWORD20.