A friend of mine recently had her fourth child.  As I've mentioned in past posts, one of the great and nurturing things about the homeschool community I belong to is the bringing of meals to families experiencing a new arrival, an illness or even death in the family.  This act of service to each other is important to me and I try to get meals to everyone I can who comes across our listserv as in need of something from the heart and kitchen.

I've also been following pinterest rather a lot and feel like I can only justify this with actually doing and using the things I find on there.

So, I found a baked macaroni and cheese recipe.  Being Lent, I thought this would be a great time to try out a meatless meal for my friend.  Here's the link to the recipe I started with:  Baked Mac and Cheese.

I made a few changes to the recipe - and will make a few more next time I make it (hence the Part 1 in the title).

First, I used a 32oz box of macaroni. 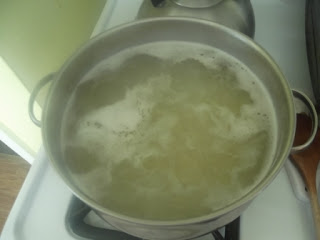 Next, I didn't want to get a canning jar lid dirty in the process of making the mac and cheese, since they're disposable and it's not canning season yet - so they're not readily replaceable in the stores right now.

So, I used my Ninja (I could do a whole blog on how much I love my Ninja). Varying from the recipe, I also used a 16 oz container of sour cream and about double the flour and milk it called for (since I had 4x times the noodles). 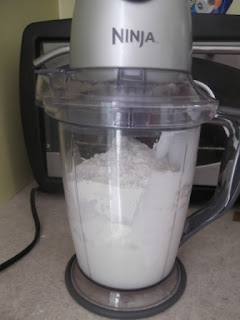 My Ninja did a great job blending the ingredients together. 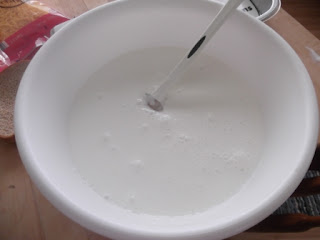 Enter the cheese and noodles: 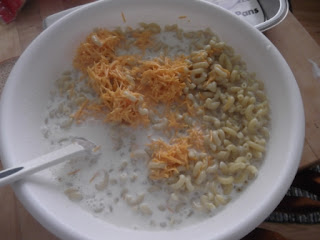 Obviously, with 4x the noodles and much more sauce, I probably should have used more than 48 oz of cheese, again, experiments aren't always perfect - this is just part 1!

It made enough for 2 giant casseroles. 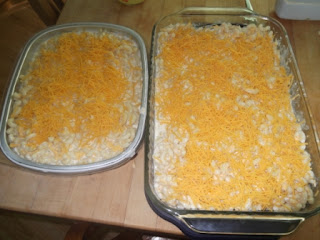 I didn't have any store-bought bread crumbs, so I took my first whack at homemade bread crumbs.....I used whole wheat bread and will probably never buy bread crumbs again!  It was just bread dried in the toaster and - again - some Ninja action! 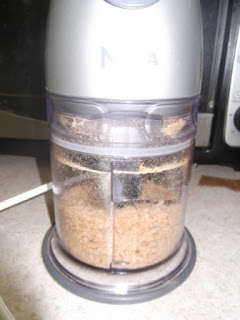 A thing of beauty may be a joy forever....so long as it's not edible.  I drizzled butter over the top per the recipe and then tasted it straight from the oven.  I promptly boxed up half this casserole and gave it to my brother and s-i-l who aren't eating meat this Lent because I was worried I would single-handedly eat the entire pan otherwise! 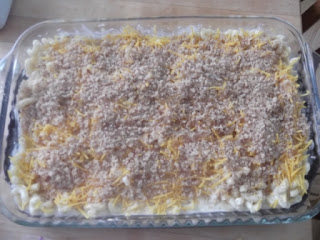 I also made some knot rolls to go with the casserole: 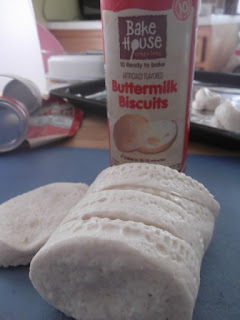 Because pre-made biscuits were just too easy to pass up..... 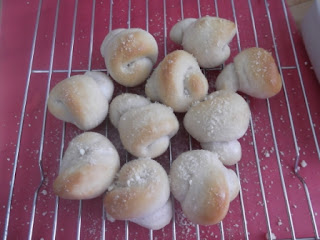 Rolled them out like a log of play-dough and twisted them into knots.  After baking, I brushed them with butter and Parmesan cheese....any herbs/seasonings you like would be just as great.

So, as I mentioned, this posting is only Part 1.  This is because I've been thinking about that mac and cheese and how I could improve on it basically since I finished eating it.

My hubby has a birthday party coming up.  It's a hot dog roast where everyone is bringing a side dish.  I usually provide the hot dogs and their accessories, pop and one or two sides to get these kinds of parties rolling at our place.  In addition to the standard couple bags of chips, I'll be making mac and cheese.

I'll be sure to post my refined recipe, but here's what I'm thinking so you have something to look forward to:

Keep the sour cream, add grated onions, increase liquid content slightly, layer in provolone and muenster cheese slices in addition to the cheddar......try not to get sick eating too much!

It's going to be epic.  If you can't wait for the finished recipe, try out the link in the meantime - it'll get you by until the party in a couple weeks when I can post the recipe.....or if you're lucky enough to know where I live, stop by and have a bite :)
Posted by Annery at 12:37 PM