My husband's mother periodically gets really inexpensive tickets to events at our local entertainment center.  When she asked if we would like tickets to the gymnastics and ice skating spectacular, it was a unanimous "YES!"

So, on a Saturday night, we packed into the car and headed out.  The billing for the show had ice skating and gymnasts with special musical guests I'd never heard of.  When we got the the show, it was clear that there were definitely followers of these musicals guests!  We saw many teeny-boppers in shirts proclaiming their fan-dom of the various singers.  That should have been our first warning.......BUT, we were still taken by surprise when they announced the singers and the many, many girls in the crowd SHRIEKED at the top of their lungs!  At first, LB covered her ears and was very unimpressed with all the shrieking....however, about 10 minutes into it, I found myself sitting next to one of the shrieking young girls in the audience - who happened to be none other than the non-shrieking child I had brought in shortly before!

About halfway through the show, I decided it was more entertaining to document LB than the show....as you can see, she wasn't a huge fan of that approach :)

It was a great night.  Near the end LB started to get sleepy.  There were lots of empty seats in front of us, so LB and I moved down at one point for a better view.  My husband snapped a shot of LB and me. 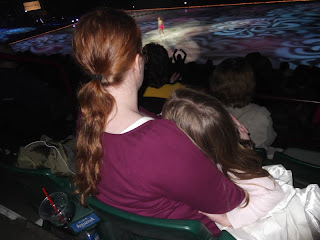 Other silliness from our house includes horse-riding and sprucing up jammies: 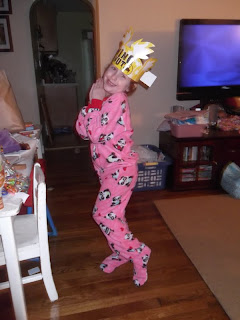 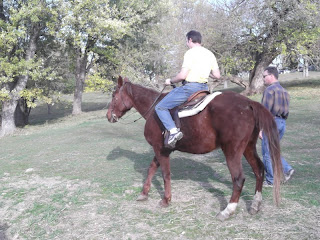 I'm doing well without injections and tomorrow will be the 12-week milestone.  Someone told me last month that having Sweet Baby would make this pregnancy go faster because she would keep us so busy....that has certainly been true.  Weeks have flown by like days!  The exhaustion is starting to ebb slightly and I'm looking forward to that 2nd trimester with an energy pick-up....hopefully Sweet Baby will be sleeping longer stretches by then too, so it'll be the perfect storm of more rest :)

Hubby's job is going well.  He's learning lots in training and showing lots of initiative to get things done.  Having watched his progress the last couple weeks, I am becoming increasingly convinced that his personality is ideally suited to a sales profession.  In a couple months, he'll be operating solely on commission, so prayers for success are always appreciated :)
Posted by Annery at 11:00 AM