This week, Theme Thursday over at Clan Donaldson is linking up with the #holylens project by Abbey. 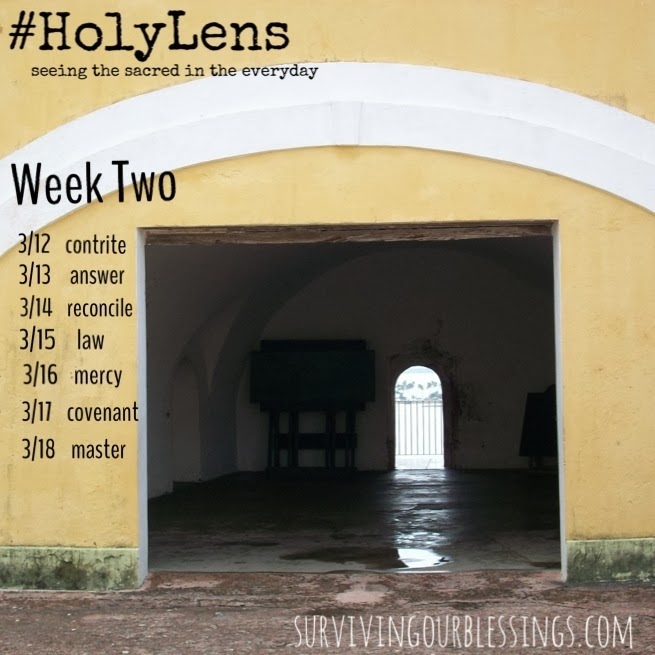 Today, as you can see, is Answer.  I started my morning by writing an answer to some long-overdue correspondence.

My other big task of the morning has been filling out intake forms for a FertilityCare appointment next Wednesday....and that's where the real story is today.

Hubby and I are in the process of learning the Creighton Model of Natural Family Planning.  Because of its specificity and scientific rigidity, it's been used in many instances with great success to overcome fertility issues.

I haven't talked about how Creighton is going much lately, but I'm feeling called to be very honest about where I am right now.  Maybe you or someone you know is somewhere similar and this sharing will help....or maybe the vent will prepare me to move past my struggles.

With secondary infertility, there isn't much burden to chart or follow any particular system.  Babies are heart-breakingly few and far between in these parts, but there's also not a lot of effort required either.

Having unexplained fertility problems for 7 years now, I've been out of practice with charting.  Creighton requires an investment in your mental space that I wasn't quite prepared for.  Observing mucus before and after each bathroom break?  Still seems a little OCD to me, but I'm trying to be a good student.  That there's science backing up all this excessiveness does make it at least tolerable to keep track....mostly.  But really, I'm in a silent revolt over charting.

The revolt makes absolutely no sense.  The charting has already picked up some biomarkers that suggest underlying issues, so I'm not doubting it works, but it feels like such a chore.  Really, can't I just go to the bathroom in peace without every trip being a constant vigil for signs of fertility?  No? Well, then I'm going to whine and complain in my head constantly until it seems like such a burden I'd rather just give up.  *Well, hello voice of evil sowing seeds of discontent when it's not easy.*

I'm struggling with Creighton.  I truly believe it will hold the answers to what the heck is going on with me; to why I can have two spontaneous pregnancies in 9 years, but concentrated efforts seem to have no effect.  And I think that's partly the key to my struggle.

I am terrified.  Terrified it won't work because it really is my Obi Wan Kenobi, but more, I'm terrified that it will work; that my life is about to change drastically.  That, dare to hope, I might be standing on the precipice about to dive head-first into what we've always wanted:  a large family.

Who will I be with more children?  Who will I be when infertility is no longer a part of me?  Can I do it?  Am I brave enough to find out?

It took me two weeks from the time I got the doctor's phone number to placing the call.  My appointment is next Wednesday at 3:00pm Central Time.  My anxiety on a scale of 1 to 10 is hovering right around an 8 over this appointment.

Having read through typical procedures, I'm thinking there's a high likelihood I'll be doing exploratory surgery in the near future to check that my remaining fallopian tube is free of blockages, perhaps a check for endometriosis and perhaps even a 14-day blood profile.  These physical aspects are equally terrifying.  I don't wanna.

Why aren't there more faces on this wall?  April 17th will mark 10 years of marriage for Hubby and I.  What is going on?  Why hasn't our openness resulted in a van-load?

It's time to find an answer.