I survived the dentist's office....surface cavity that didn't even require anesthetic.  If you didn't know, there's a huge difference between dentists.  My dentist is one of the best....having shortly visited one of the worst during an insurance debacle, I fully appreciate my dentist.

The bug to put the bathroom back together started with my husband fixing the caulk in the tub. 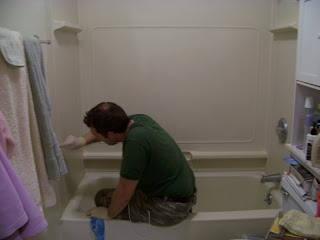 We'd been having problems with mildew on the caulk, so my dear, patient husband spent the better part of an afternoon scraping the old caulk off and putting on new caulk.

The consequence of the new caulk we didn't think of until later was that it would be a full day before we could shower again......thinking we all would've taken a quick shower before the caulk if we'd thought ahead :)  Thirty-six hours later, we had a mildew-free shower that we were all able to use!

As I said, once the tub was caulked and I had empty hands I needed to fill with industry to take my mind off impending drills.....I started in on finishing the painting of the walls.  The reason the fourth wall hadn't been painted with the other three was that a cabinet had to be taken down in order to paint that wall. 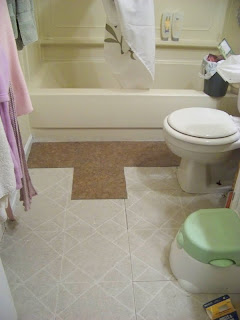 I started by laying out the tiles to get a handle on the layout. 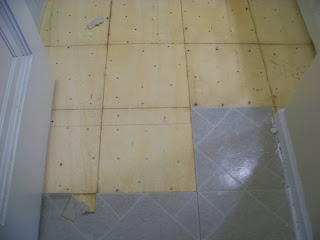 The worst part of the job (besides cutting the tiles around the toilet - yikes!) was ripping up the old vinyl.  I put the old vinyl down 5 years ago when we moved in.  I put it down over the vinyl that was already there, so I didn't want to put a third layer down over it.  This meant a very tedious start to the project! 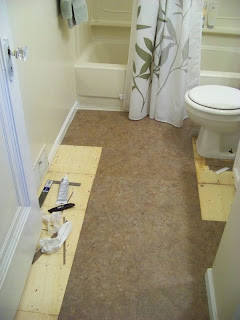 The first few tiles were easy-peasy :)  Whole tiles, on the grid and away I went. 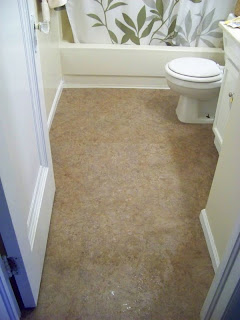 Once I got the tiles cut and laid that were NOT easy-peasy, I was able to grout and caulk to get a water tight seal........Little Bean is still a bit of a splasher when she takes a bath, so it was doubly important :) 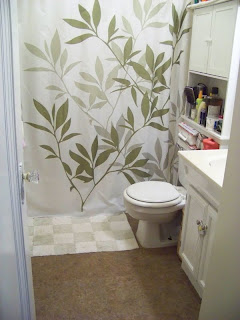 With the floor laid and the grout and caulk set, my hubby got the white cabinet back up (top right) and the bathroom is set!

It looks great!  It was hard work and I felt like I had a real understanding of the phrase, "worked my fingers to the bone" since they hurt down to the bone after ripping up the old vinyl and laying down the new.  The bathroom looks awesome, if I do say so myself.  Totally worth the sore fingers :)
Posted by Annery at 7:31 PM